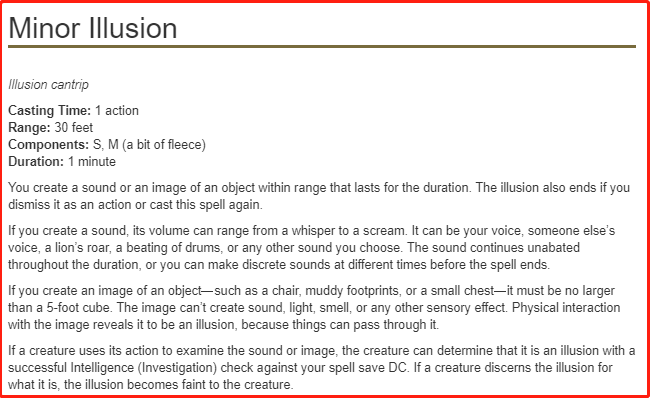 How to use dnd 5e minor illusion?

You create a sound or an image of an object within the casting distance and maintain it until the d&d 5e minor illusion spell duration ends. You can also dismiss the illusion with an action, or cast the spell again to terminate the illusion.

If you create a sound, its volume can be a low whisper or a loud scream. It can be the voice of you or anyone else, or the roar of a lion, a drum sound, and any other sound you specify. The sound will not diminish for the duration, or you can create several scattered sounds in different time periods before the spell ends.

If you create an image of an object (such as a chair, muddy footprints, a small box, etc.), the size of the object must not be larger than a cube that is 5 feet in length. The image has no sound, light, taste, or any other sensory effects.

Since the image can be penetrated by any object, the physical interaction with it will reveal the essence of its illusion.

When a creature uses its actions to investigate the sound or image, it must make an Intelligence (Investigation) check against the spell’s save DC. If the check succeeds, it is judged to be an illusion. The illusion will appear blurred in front of the creatures that see through it.

1. I’ve always had this crazy idea of using dnd 5e Minor Illusion like a Smoke Bomb effect for Shadow Monks. Although not sure how effective it would be in DnD 5e.

2. DND CHARACTER CONCEPT: a character that doesn’t speak aloud, and instead uses the minor illusion cantrip to make a comic-style speech bubble appear above their head with whatever they wanna say.

3. Swashbuckler is so strong but for mele, if you focus on ranged attacks assassin is better.

Trickster is just fun. Rogue with mage hand is reason enough to take it.

I agree with this and besides the combat things, the d&d 5e minor illusion will be a great utility for stealth outside combat.

4. How many times can I cast minor illusion 5e?